How to use the NTC

2. Steady working point of NTC in the transistor circuit
Figure 2 is a circuit of stable transistor working point of three kinds of NTC.
Figure 2 (a) shows that a simple transistor current amplifier took a big RT in the base loop. When temperature changes in the environment, line output current will change. And after increasing NTC, the collector current can be automatically adjusted and the output gain can be stable.
In the fig 2(b), the NTC is connected in parallel withemitter resistance. When theresistance of transistor emitter junction increases with the temperature increasing, the RT will play the role of compensation.
Figure 2 (C) shows low frequency power amplifier stage of a transistor radio. The under bias resistor of this levelis connected in parallel with on RT.When the temperature rises cause electrode current increasing, the under bias resistance will decrease and the base current will also reduce, so the collector current can be fall, which plays the role of stabilizing operating point.

Fig. 2 Steady working point of NTC in the transistor circuit 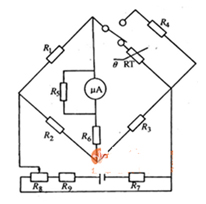 Last : The Working Principle of Thermistor
Next : The advantages and characteristics of TEC