This article is from Photonics Magazine. TEC controller design experts from Analog Tehcnologies, Inc offer tips to lower the cost and simplify the design of the devices, and to increase their ease of use.

TECs have several advantages for temperature regulation: high accuracy and stability, fast response time, a wide set-point temperature range, and a simple structural design with no moving parts. Also, they are small and lightweight, reliable, noise-free and environmentally friendly. However, when comparing with temperature regulation approaches based on heat sinks or compressors, for applications requiring especially high thermal power output, TECs may have certain shortcomings: low efficiency, low thermal power, high cost of both TECs and controllers, and complex controller designs. 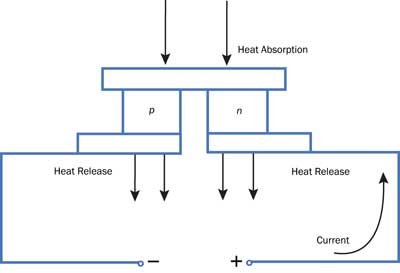 Figure 1. Thermoelectric coolers (TECs) are highly accurate and stable for temperature control, with a wide set-point temperature range and a simple packaging design with no moving parts. They are small and light, highly reliable, noise-free and environmentally friendly. Here, a structural diagram of a TEC.

In 1834, French physicist Jean-Charles Athanase Peltier found that the junctions of dissimilar metals are heated or cooled depending upon the direction in which an electric current passes through them. This effect became the Peltier effect.

A TEC has two ceramic plates with Peltier elements sandwiched in between. Based on the Peltier effect, these elements produce heat and cold by injecting an electric current through them. All the Peltier elements are connected in series; the first and last are each connected to a separate wire terminal. The plate on which the two terminals are mounted is often called the hot-side plate or simply the hot side; the other side is designated the cold-side plate or the cold side. The two sides are symmetrical in terms of thermal functionality, but the thermal load of the side with the terminals is a little higher because of the wire leads.

A DC current is injected into the TEC through the two terminals, and this generates a temperature difference between the two plates: One plate becomes cooler, while the other side becomes warmer.

When the cold side cools down, the TEC terminal connecting the positive lead of the power supply is designated as the plus (+) terminal, or the positive lead of the TEC; the other is designated as the minus (-) terminal, or the negative lead. As the DC current reverses direction – i.e., flows out from the plus terminal – the cold side will heat up and the hot side cool down. Therefore, TECs can be used both for cooling down and heating up the thermal load.

TECs can’t “generate” cold; they only move heat from one side to the other. They “produce” heat more efficiently than cold under the same size or current conditions because not all of the electric energy of the DC current is used for removing the heat; some energy is consumed by the Peltier elements and converted into heat, which is conducted to the two sides of the TEC at the same time. This heat boosts the heating-up power of the TEC but makes the cooling-down function less efficient.